Identifying and agreeing upon a sustainable source of transportation funding continues to be elusive in Colorado. There is broad agreement among citizens and the state’s leaders that Colorado desperately needs to address its aging and over-burdened transportation infrastructure.  However, there is little or no agreement on the mechanism to provide an adequate and sustainable funding source to do so.  Some of the options being discussed include new fees (such as on fuel, car registrations, certain types of vehicles, etc.), tolling, bonding; and looking to the state’s General Fund.  The voters soundly defeated two recent ballot initiatives – one a sales tax increase and the other for bonding, and public polling shows very little support for a gas tax increase. It will likely fall to the state legislature to find the fix as there is little interest in putting another transportation funding ballot question in front of voters, based on recent outcomes.

The COVID-19 pandemic and resulting Stay at Home Order had a massive impact on Colorado’s traffic. Per a Google Community Mobility Report published April 5 – statewide, there was a 47% decline in trips related to ‘retail & recreation,’ and a 41% decline in trips related to ‘workplaces.’ The numbers are even more dramatic along I-70 and in Colorado’s high country where populations have been hit hard by coronavirus. Due to strict urging against high country travel by the Governor, the Colorado Department of Natural Resources and the Colorado Department of Public Health & Environment, I-70 has seen an incredible reduction in traffic. The total number of cars that traveled on I-70 this March was 34% less than the total number of cars that traveled on I-70 last March. More meaningfully, traffic declined over 65% in the first three weeks that the Stay at Home Order went into effect.  Decreases in weekend traffic in late March were the most telling as I-70 traffic dropped by more than 84% on Fridays, 72% on Saturdays, and 73% on Sundays.  After a low point in mid-April, weekend traffic counts have increased slightly each weekend, despite the state order encouraging people to recreate within 10 miles of their permanent residence. 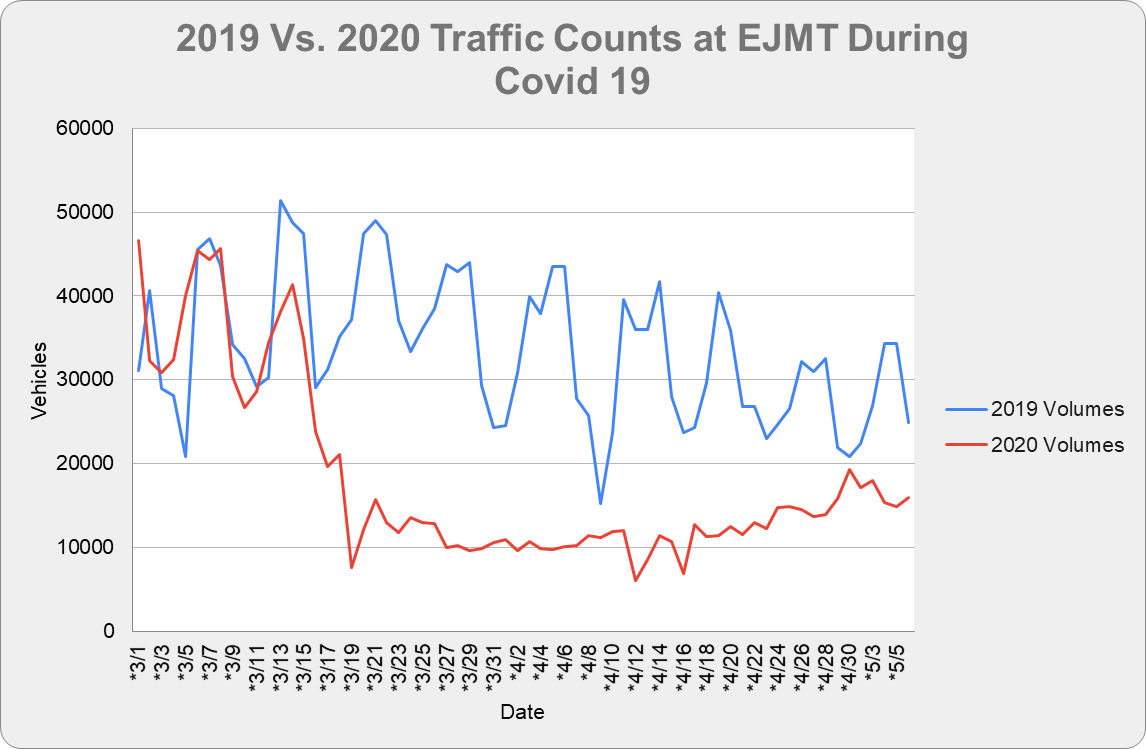 Two new carpool apps that facilitated higher occupancy travel among I-70 weekend users were expected to launch during the 2019-2020 ski season; but immediately after the first one went live, some regulatory issues came to light that would make it impossible for such rideshare businesses to operate. The I-70 Coalition raised the issue with I-70 corridor state legislators and the issue received swift bi-partisan support that resulted in the introduction of HB20-1315. The bill passed out of the House Transportation & Local Government Committee just before the state legislature shut down due to COVID-19.  It is unknown if further action will be taken on the bill when the House and Senate return to work later this month.

Westbound Mountain Express Lane (MEXL)
Essentially a mirror of the eastbound MEXL, this project will improve the shoulder between the Veterans Memorial Tunnel and the Empire exit so it can be utilized as a tolled travel lane during peak travel times only.  This project is expected to bring the same benefits as the eastbound MEXL has delivered – a reliable travel time for those that utilize the tolled lane and decreased travel times for all lanes.  Construction is underway with completion expected as early as November 2020. Installation and testing of tolling equipment will follow with a target opening of spring/summer 2021.

Vail Pass Auxiliary Lanes
This project includes a third travel lane in both directions on the west side of Vail Pass, curve smoothing, Variable Speed Limit signs, relocating the bike path, reconstructing the lower truck ramp, an automatic closure system, wildlife fence and crossings, select shoulder widening, and the replacement of one bridge.  The Environmental Assessment (EA) is in process and CDOT hopes to have a signed decision document by the end of 2020.  CDOT has applied for both a federal INFRA grant and a BUILD grant. This project can be phased based on available funding but total project cost is estimated at $750M-$800M.  Pending the project being fully funded, three years of construction would begin in 2022.

Floyd Hill
This project will include an additional westbound lane on the west side of Floyd Hill, curve smoothing, multiple interchange improvements, completion of the frontage road work and a new bridge. Two designs will be considered under the NEPA assessment – both a tunnel and a viaduct design. Total project cost is estimated at $500-$700 M.  A group of stakeholders is working to identify funding mechanisms to fund this project such as federal grants, federal loans and tolling revenue. The I-70 Coalition sent a letter to our Congressional delegation highlighting the Floyd Hill project as a high value project, worthy of investment and inclusion in a future federal infrastructure stimulus package.

This project will re-design Exit 203 at Frisco to accommodate current and anticipated traffic volumes. It will add a third eastbound lane from Frisco to Silverthorne, include improvements to the overlook, add wildlife fencing, and do bridge work at Exit 205. This feasibility study is almost complete and an environmental review will follow. Construction is slated to begin in 2022, pending the identification of funding.

GoI70.com continues to be THE information source for I-70 travelers looking to avoid congestion, learn about transit options such as Bustang, Snowstang and airport shuttles, learn about real-time traffic information resources, as well keep up-to-date on I-70 News that will impact their trip now and into the future.  Page view and social media engagement has grown consistently since it launched in 2009.  In February of this year, the website saw a new one-day record with over 15,000 page views in a single day.

Early data indicates Season 1 of Snowstang was a success and that CDOT exceeded their goal of 40% occupancy. This direct-to-resort bus service was funded through ticket sales and contributions from the destination resort and in the case of Steamboat Springs, a contribution from the City.  Kudos to Arapahoe Basin, Loveland Ski Area and Steamboat Springs for partnering with the state on this much-needed service!

Currently we are facing so many unknowns. It is impossible to understand exactly how the COVID-19 pandemic will impact state and local government budgets, the ski industry, small businesses, tourism – and what all of that that will mean for I-70 travel, infrastructure and non-infrastructure investments.  As we wait to see what the future brings, the I-70 Coalition will continue to advocate for investment in the mountain corridor, actively participate in project leadership teams, and seek opportunities to advance near term efforts to improve mobility on Interstate 70.

Sign up here to receive quarterly newsletters and pressing I-70 alerts!

Site By Imagine That, Inc.